You are here: Home / About / Appaloosa

My Appaloosas, My Redhearts, My Future…..

Since importing Peyres Catori Cat from France in 2008 and Princesse Pascale from Austria in 2009, I have learnt so much about the Foundation Appaloosa. I owe my gratitude to the Appaloosa Club UK, the British Appaloosa Society and their wonderful members. There is still so much to learn about the breed; the history, the rules and regulations of the different societies and what the Aappaloosa horse itself can offer not forgetting the ongoing development of the genetics behind the breeding. For whatever reason you are reading this, I hope you will appreciate the world of the Appaloosa…..being a pure breed of colour.

The history of the Appaloosa is phenomenal….Some of the Appaloosa’s history is fact, backed up with original written accounts and photos but some of the information is fiction and built on the facts but edited without proof. In Europe, there are caves with prehistoric drawings of spotted horses, Ancient Greece had images of a more modern type of spotted horse and Ancient China had images of spotty horses on their statues and pottery. It is fair to say that the breed existed long before recorded history began.

Even to a non-horsey person, the recolection of an association between the cowboys and the Indians I am sure would be of a cowboy wearing a Stetson, riding in a big saddle, with a gun in one hand and a set of reins held high in the other, and the Indian in a feather headdress, galloping bare back on a coloured horse, using both hands on his bow and arrow.  Granted, Cowboys and Indians fought on horses, but what colour horses were they? 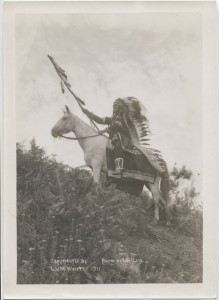 Courtesy of The North West Museum

Within every herd/tribe,  there was a variety of Appaloosa coat patterns, such as solid, snow cap, few spot, snowflake, varnish, blanket and leopard. I guess it was the “Spotted” horse that was associated with being called an Appaloosa to the untrained eye?

Wild and tamed Appaloosa horses breeding, bought, sold, exchanged or stolen appeared on the Great Plains of America after their arrival with Spanish conquistadores. This changed the lives of the Native Indians, it enabled many tribes to hunt more efficiently, helped them become warriors on horse- back and later became a symbol of wealth. One of the most famous native tribes associated with the Appaloosa Horse is the Nez Perce Indians of Idaho, Northeast Oregon, and Southeast Washington . They were renowned for selective breeding by their own methods, establishing only the very best quality coloured horses. It is not known how many coloured Appaloosa’s they had or bred, their herds are also photographed with many solid colours. It is a magnificent thought that the Nez Perce worked out  how to breed a “spotty” horse. One thing is for sure, it’s clear these solid horses were relied upon for breeding to produce significantly marked off spring.

The war with the Nez Perce Indians, who were defeated at Montana by the U.S. Cavalry resulted in many of these horses being slaughtered and the breed declined rapidly for many decades.  A few horses escaped the slaughter by various means but the breed became “lost”.  The history is “huge”, if you are interested then have a look at some of the “interesting links” at the bottom of the page, every site has an in-depth article on the Nez Perce and the Appaloosa.

The decline in the Appaloosa breed was made public and to their rescue came many people who strived to save the breed…. Many breeders took it upon themselves to invest time, money, love and devotion to help save this breed from extinction. From these strong unique people established the registries. There are many associations in America but the main two in the UK are the Appaloosa Horse Club UK (ApHC UK) and the British Appaloosa Society (BApS). The ApHC UK is one of many daughter companies within Europe to the main Appaloosa Horse Club (ApHC) in the USA.

Every society has its own criteria for registering and breeding Appaloosa’s but the one thing they ALL have in common is;

I realise my mares have some  “Original Appaloosa Foundation Blood” lines in their pedigrees, these names are indicated by an “F” followed by a number and some are direct blood lines of the Nez Perce Tribe. These are recorded Appaloosas from a closed stud book held with the ApHC. If you are interested in finding out more on the Real Foundation Appaloosa have a look at Foundation Appaloosa Horse Registry. Both my mares have pedigrees that can be traced back to stock originating from the Arabian, Barb and Thoroughbred.  The Arabian horses known for their speed, refinement, endurance, and strong bone such as Godophin Arabian, 1724. Barb horses which are known for their hardiness and stamina, such as Helmsley Turk, 1665. The Thoroughbred Horse known for its agility, speed and spirit such as Eclipse, 1764, and most importantly the The Nez Perce Stock being a mare called “Dolly”.  All these foundation stock are found in my mares pedigrees according to the information held on the All Breeds web page, www.allbreedpedigree.com .

The ApHC requires a certain number of forefathers in an Appaloosa’s pedigree to be eligible for the Foundation Pedigree Designation (FPD) programme. Both my mares are enrolled and qualify at 90% and 100%. This does not make them “True” Appaloosas, only by selectively using Stallions with a high percentage of Foundation Blood will I perhaps one day achieve a True Appaloosa? The FPD programme allows the Appaloosa to be registered by crossing  to Quarter Horse, Arab and Thoroughbred yet still it will be registered as an Appaloosa, the FPD percentage of the last five generations will reflect this diluting of Appaloosa blood.

When it comes to an Appaloosa it is a personal preference, what you have, what you want and what you get in relation to purity of blood, colour and pattern.  Whatever the FPD percentage is, whether it is a pure bred or  part bred, it will be the most trainable, loyal and willing horse that can be used extensively in all equine disciplines, from a happy hack to a three day eventer……

The bottom line is the Appaloosa is a unique, distinguishable breed in its own right!