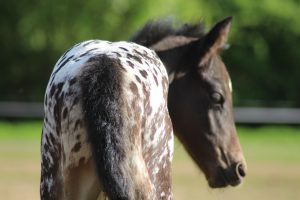 Tally is out of our imported mare Princesse Pascale with frozen semen from our Stallion Reus. This is our first home bred foal by Reus and we are delighted with this mating, the sire and dam have complimented Reality with pure quality.

He leads, loads, travels very well alone or with others on a lorry, ties and is happy to be bathed. He is content to leave the herd and is confident to be taken on walks. He is very good for the farrier, well mannered and has no vices. He is up to date with worming and flu/tetanus vaccinations.

2018
His debut outing at Royal Windsor in May 2018 was one of Redheart Appaloosas biggest achievements, gaining the first place in the young-stock class (against seasoned two and three-year-olds) enabled him to compete in the in-hand championship, where he gained an In-Hand Reserve Champion from the over four-year-old Appaloosas.

His second outing was the Appaloosa Horse Club UK National Show, where he didn’t disappoint us, winning the Most Colourful UK and the USA being awarded the Rhodes Appaloosa Trophy, taking Most Colourful Reserve Champion. He then won his age group in UK and USA geldings and the USA FPD Halter Geldings Class. Finishing his day with UK Reserve Male Champion, USA Reserve Male Champion, and Reserve Champion Young-stock.

His third and final show for 2018 was the British Appaloosa Society National Show, what a way to end a season, being placed in his age class put him forward for the Championships. Taking the Reserve Champion Young-stock, the Reserve Male Championship and wait for it…the Reserve Supreme Champion of the show!
Redheart Reality’s success in 2018 was rewarded with a certificate of recognition for Outstanding Achievement called a Register of Merit (ROM) award for HALTER by the Appaloosa Horse Club UK.

Reality has lived up to his name, The Appaloosa Horse Club UK Spring Show gave him many titles, Champion Male, Champion Young Stock, Champion USA and Supreme Champion In Hand. We are so very proud of him.

Royal Three Counties show, yet again he caught the eye of the Judge with some wonderful comments, winner of the Main Register Young- stock Class and Reserve Champion In Hand.

Expected height 16hh+ and with an athletic build, he could easily compete in any discipline but the comments from those who have judged him say, “definite dressage potential”. Time will tell… 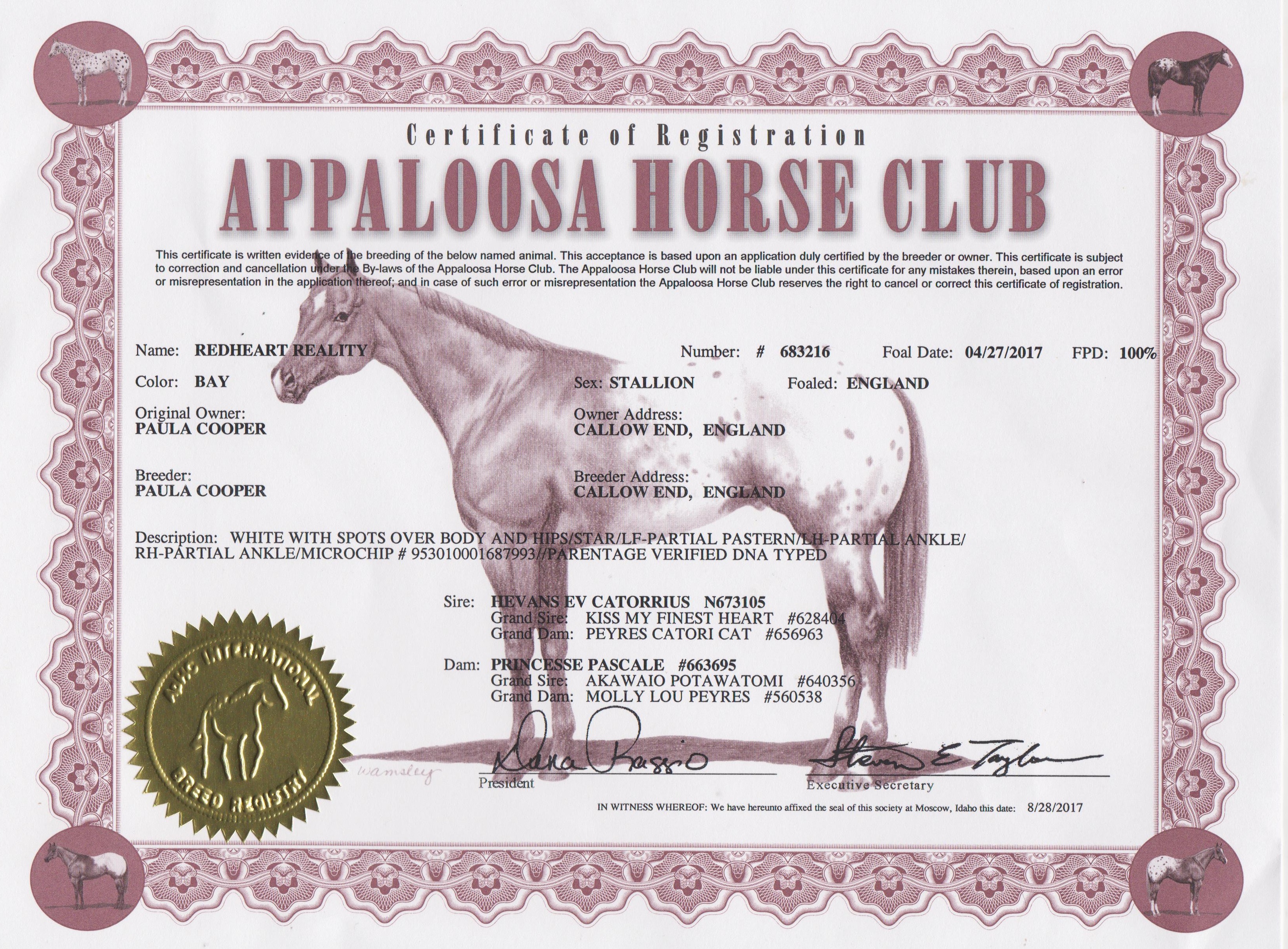 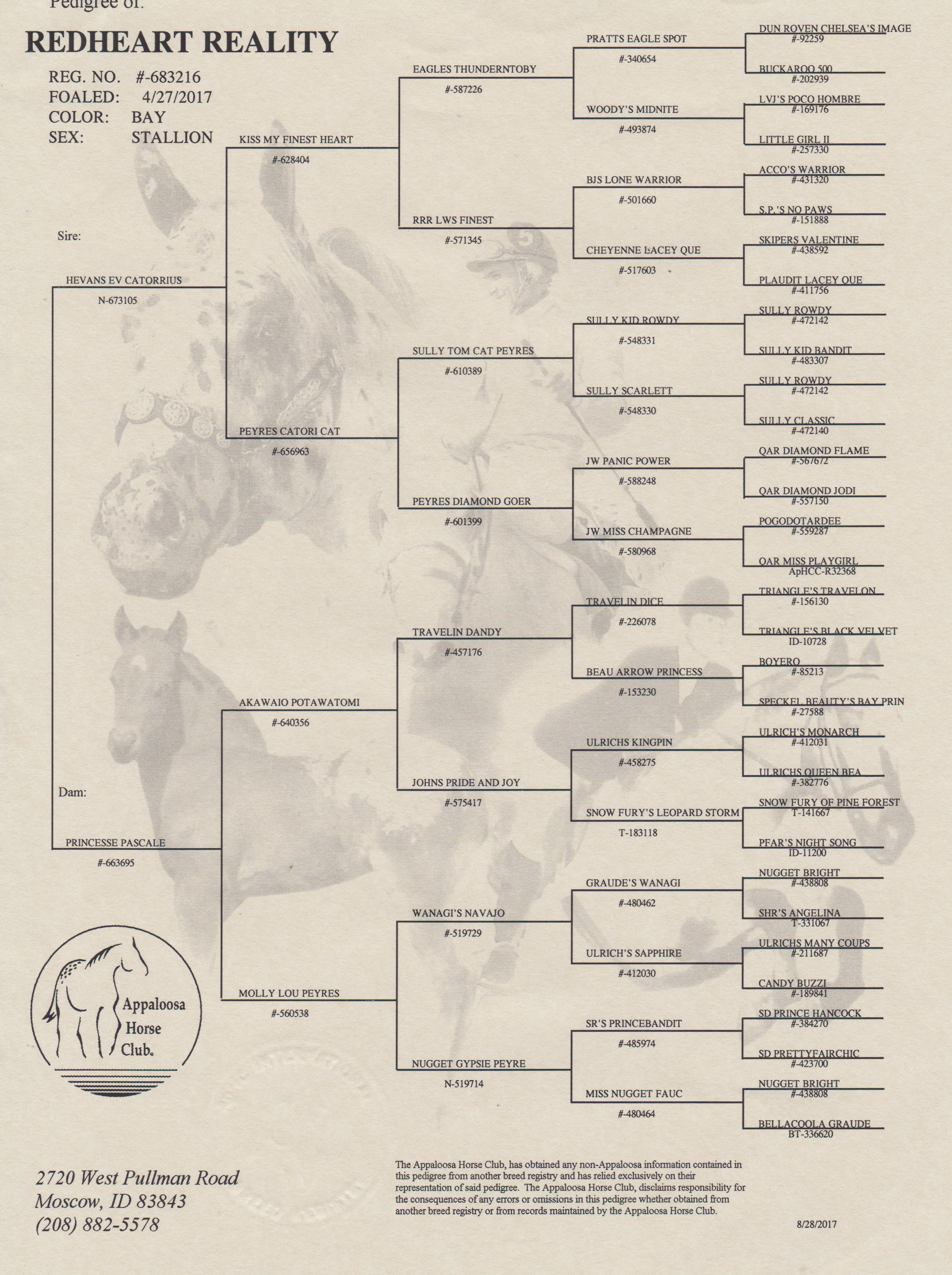 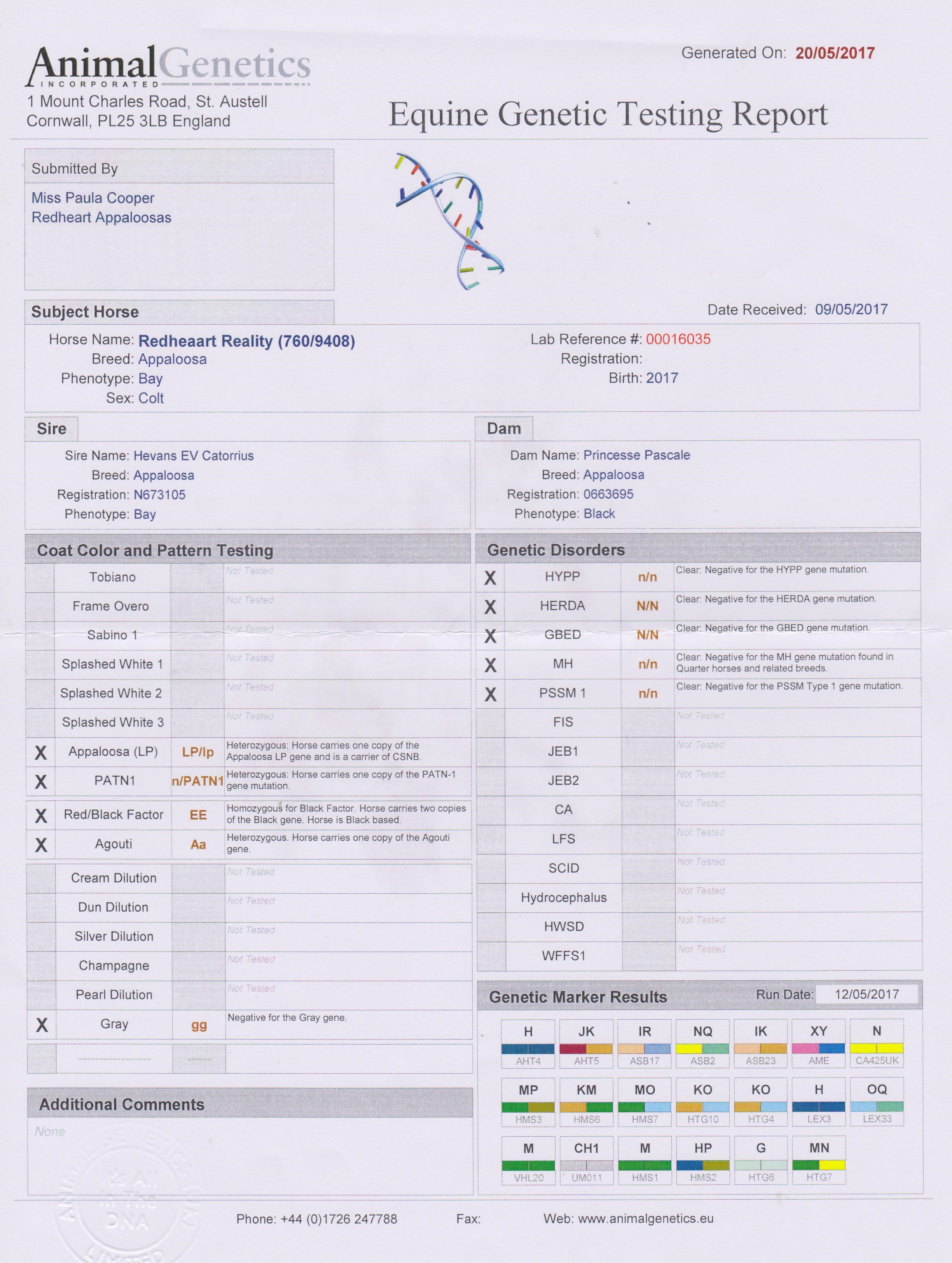 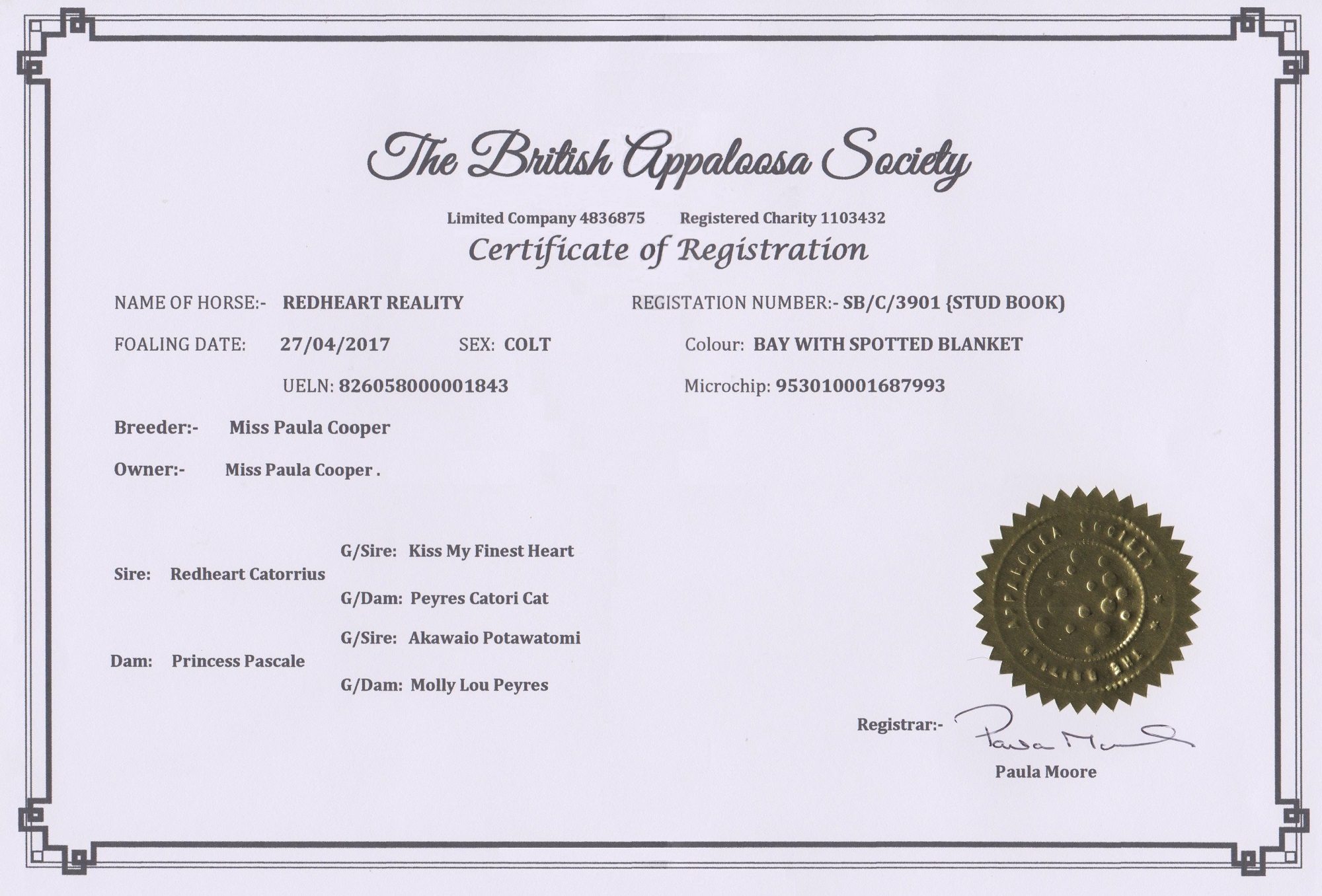 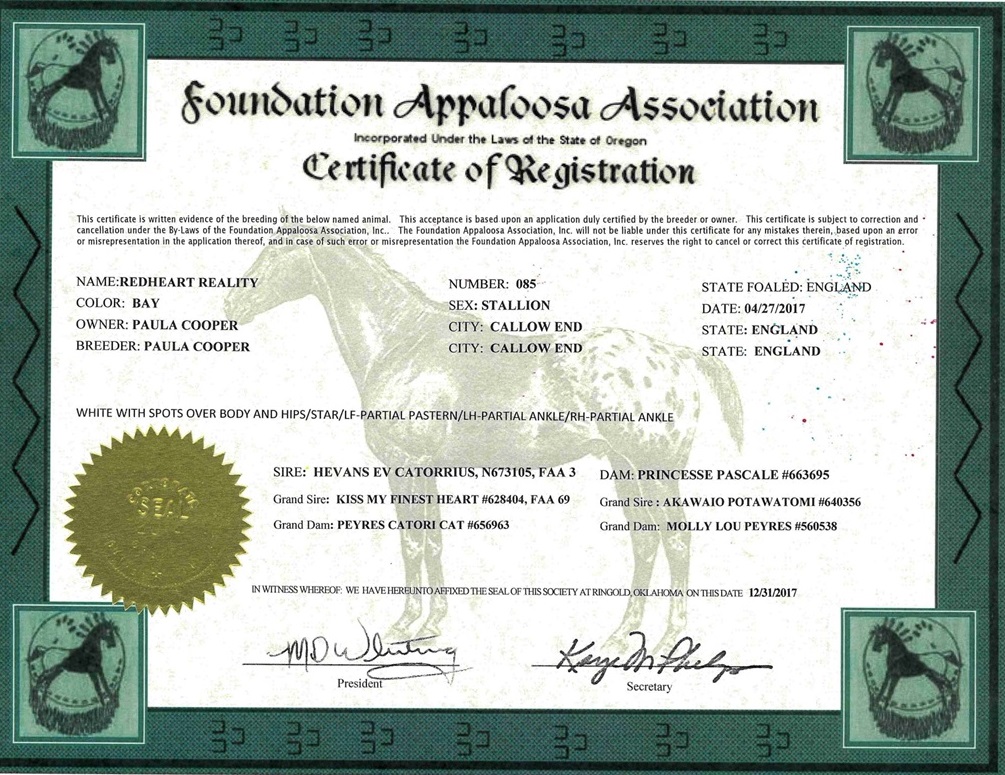 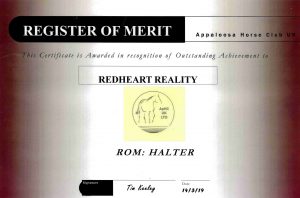 The Birth of Redheart Reality